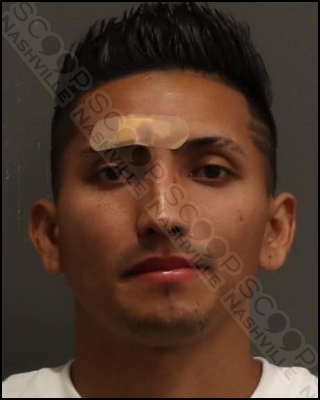 While Nashville Fire Department medics were responding to a crash of 27-year-old drunk driver Oscar Vasquez, he struck a fire engine with his vehicle and fled the scene. Officer made contact with him a short distance away, where he had crashed into yet another vehicle. Vasquez admitted to drinking “3 drinks” but claimed it was a couple of hours prior to driving. Inside his vehicle, officers located several open containers some with residual alcohol still inside. He is free on pre-trial release and had no driver’s license.

Oscar Vasquez was booked into the Metro Nashville Jail on April 17th, charged with driving under the influence (DUI), leaving the scene of an accident, no driver’s license, and vandalism of government property. A commissioner set his bond at $7,600 and he was given pre-trial release to his 135 Twin Oaks Drive address in Nashville.