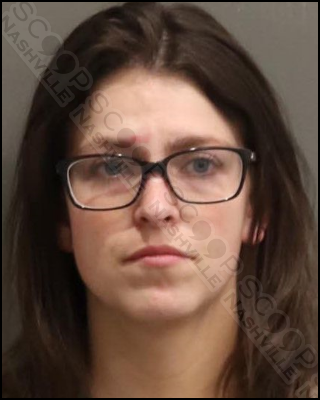 After a Saturday of drinking from Noon until 10 p.m., 25-year-old Ashley Lynn Russell was charged with the domestic assault of her lover, Sam Taylor. The couple just moved to Nashville a few months ago. During separate interviews at the home, both parties’ statements were consistent. An argument turned physical, and Ashely assaulted Same by pushing him. He attempted to keep her away, using his knee to attempt to keep distance between the two, which is when she called the police for assistance, despite continuing to strike him. Ashley Russell was taken into custody and charged with domestic assault.

Ashley L Russell was booked into the Metro Nashville Jail on April 24th, charged with domestic assault. She is free on a $1,000 cash bond to her 6112 S. Riverbend Drive address in Nashville.