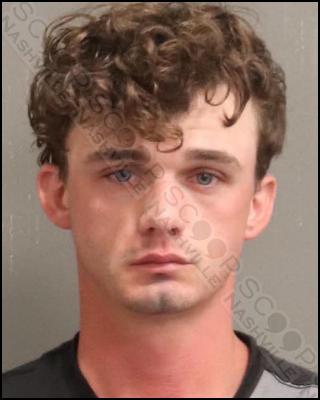 22-year-old Robert Mason, of New York, is charged with the assault of two Metro Nashville Police Officers, disorderly conduct, public intoxication, and resisting arrest after employees flagged down police for assistance as he was being kicked out of Scoreboard Bar & Grill. Refusing to let officers call a friend to help him leave on his own, he clenched his fists, took a fighting stance, and screamed “THIS IS AMERICA!”. Officers tackled him as he began to resist arrest. He Grabbed Officer Joshua McGarvey’s ring finger while twisting and clenching it, which caused an injury to his finger and a hyperextended knee from the fight. He also caused scratch injuries to Officer Snyder from his fingernails.

Robert J Mason was booked into the Metro Nashville Jail on April April 23rd, charged with three counts of assault on an officer, public intoxication, disorderly conduct, and resisting arrest. A commissioner set his bond at $5,550 and he was given pre-trial release to his 39 Briggs Street address in Johnstown, NY.