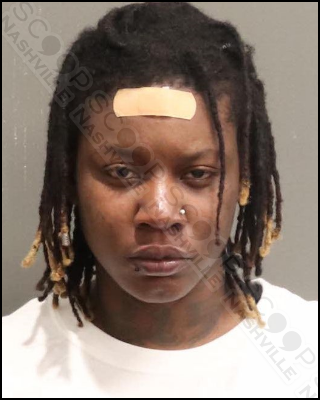 24-year-old Dedricka Norris was causing a scene outside her girlfriend’s Briarwick Drive home on May 4th, yelling and screaming for her girlfriend to come outside. Despite multiple friends and family attempting to escort her away and de-escalate the situation, she was not going quietly. When police arrived and decided she would not leave on her own, they directed her to place her hands behind her back, to which she replied: “suck my dick!”

As officers reached for her arm, she pulled back, assumed a fighting stance, and screamed she would “knock you out!” to one officer. Officers presented a taser in hopes she would comply, however, she did not, and they decided to wrap her arms and take her to the ground. While on the ground, Norris attempted to bite the officers. Once in cuffs and while in the process of helping her to her feet, she swung her legs, striking officers in their upper legs. Finally, she was placed in a patrol car, where officers claim she smashed her own head against the partition several times, injuring herself. She could not be buckled in, due to fear of being bitten.

Dedricka Lajuana Norris, of Antioch, was booked into the Metro Nashville Jail on May 4th, charged with disorderly conduct, resisting arrest, and assault of an officer. She is free on a $6,500 bond.