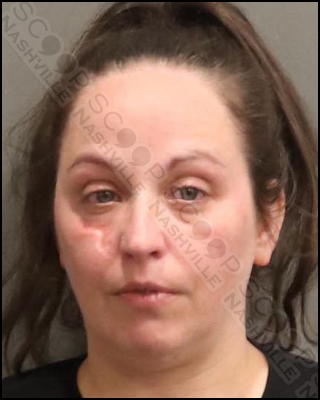 In 2006, 39-year-old Katie Case was charged with DUI, eventually pleading down to a reckless endangerment charge. In 2018, she was charged with another DUI, which was also eventually lessened to reckless endangerment. Now, in May of 2022, she once again faces a new DUI charge, however, in the eyes of the court, it’s technically her very first DUI all over again, and she’s never received any actual consequences from her prior actions. In this case, officers observed Katie Case swerving and honking with no other vehicles around her, and drove all the way up onto the curb when she was pulled over. She told officers she had “two shots” before driving, and police say she was heavily intoxicated and performed poorly on each and every field sobriety test. Inside the car with her was an open 16oz bottle of Michelob Ultra and six plastic 1oz shooters of Fireball liquor.

Two years ago, Katie commented on one of our stories, asking if we were running out of people to post. We’re happy to report, Katie, that there is no shortage of news stories to cover, and we appreciate your willingness to contribute to the supply to choose from.

Katie Jane Case, of Pitts Ave in Old Hickory, was booked into the Metro Nashville Jail on May 5th, charged with driving under the influence (DUI), violation of the implied consent law, and violation of the open container law. A commissioner set her bond at $5,000, and the Davidson County Sheriff’s Office gave her pre-trial release.