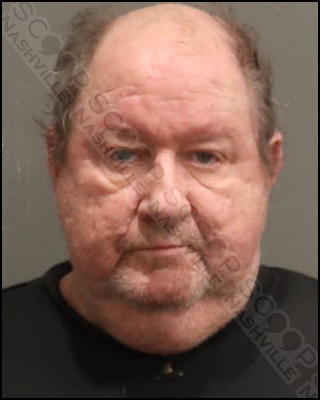 Metro Nashville Police responded to the Taco Bell on the 2900 block of Gallatin Pike Wednesday night on a report of a disorderly person. Employees stated that 63-year-old Philip Davenport was stumbling around his 2003 Lexus SC430 in the parking lot. Police approached the man and observed his house key was in the ignition and the vehicle’s ignition key in the outside door keyhole. After performing poorly on field sobriety tests, Davenport stated, “I’m really drunk, aren’t I?”

Davenport told police he had consumed 4-6 beers, and police located five open 25oz cans of Natural Light beer inside the Lexus. Police say he performed poorly on field sobriety tests and was transported to booking where he blew a 0.225% BAC on a breathalyzer test, nearly three times the legal limit.

Philip L Davenport was booked into the Metro Nashville Jail on May 12th, charged with driving under the influence (DUI) and violating the open container law. A judicial commissioner set his bond at $3,100. The Davidson County Sheriff’s Office gave him pre-trial release from their facility.