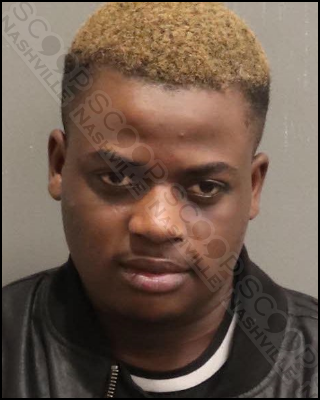 20-year-old Imani Amuri was charged with DUI on April 10th after he crashed into a utility pole in Madison, and officers found him passed out behind the wheel and a car full of empty small liquor bottles. He blew a 0.228% BAC. Despite a commissioner setting his bond at $3,000, the Davidson County Sheriff’s Office gave him pre-trial release. 27 days later, on May 7th, he would lose control of his car once again and be arrested for a new DUI. This time a judicial commissioner set his bond at $5,000, and once again, the DCSO gave him pre-trial release.

Police responded to Two Mike Pike and Hollywood Street in Goodlettsville on May 7th, where they found that 20-year-old Imani Amuri had been doing donuts in a parking lot until he lost control and slid into a ditch. Officers say he was slow to respond to commands and instead on his feet once he eventually exited his vehicle. He had a strong smell of alcohol about him and was slurring his speech and unable to form complete sentences, according to the arresting officer. He was unable to stand steady enough even to attempt field sobriety tests.

Imani Amuri was booked into the Metro Nashville Jail on May 7th and charged with driving under the influence (DUI). A judicial commissioner set his bond at $5,000, and the Davidson County Sheriff’s Office gave him pre-trial release. At the time of his arrest, Amuri was already free on pre-trial release from April 10th 10th.