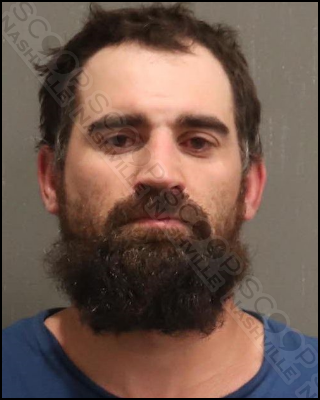 Police were dispatched to 3rd Ave N near the railroad crossing as citizens reported a white Range Rover parked in the middle of the road for an extended period of time. When police arrived, the vehicle had moved to the parking lot nearby. Officers made contact with 35-year-old Shatner Franchi, known locally as DJ Shatner, who was rummaging through the vehicle, telling officers he was searching for his phone. when officers asked how much he had to drink, he initially said two 24oz beers and later said 1-8 beers. Franchi wasn’t sure where he was coming from or where he was going and couldn’t recall where he lived. He performed poorly on field sobriety tests and eventually blew a 0.126% on a breathalyzer.

Shatner L Franchi was booked into the Metro Nashville Jail on May 12th, charged with driving under the influence (DUI). A commissioner set his bond at $5,000, and the Davidson County Sheriff’s Office gave him pre-trial release from their facility.