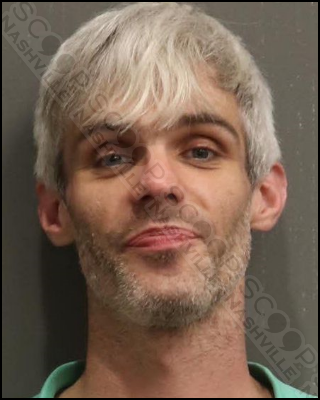 35-year-old Realtor & Soundcloud Rapper Houston Parks told Metro Nashville Police he smoked marijuana “minutes before driving,” according to an arrest warrant obtained by Scoop: Nashville overnight. Officer Wesley Tilley encountered Parks after he was involved in a crash. Parks was reportedly very instead and fumbling excessively when asked for his information and license, and had slurred speech. When the officer asked him what drug he had taken today, Parks admitted to smoking marijuana “just minutes prior to driving.” After being placed under arrest for DUI, a search of Parks resulted in a small amount of white powder being found in his pocket, which he admitted was cocaine.

In 2006, Parks was found asleep at the pumps of a gas station on Charlotte Pike and found with a bottle of 16 pills, identified as Xanax and steroids. He was charged with DUI, which was reduced to reckless driving, with the drug charges dismissed.

In 2007, Parks was a passenger in a car that was pulled over for a traffic infraction. He fled the scene and ran on foot, eventually being found with marijuana and “woo” or what was further described as fake pills chopped up to look like cocaine, which he was selling to other people. He was charged with a felony for the fake drugs, which was dismissed by Jude Casey Moreland, and please guilty to simple drug possession.

In 2009, MNPD West CSU Detectives met with a CI (confidential informant) who stated a male named “Houston” was selling large quantities of cocaine. The informant set up a deal, and a felony amount of cocaine was bought. The DA’s office nolled this charge and didn’t prosecute the felony charge.

In 2010, Parks was clocked at 44 in a 30 mph zone and believed to be driving under the influence of a narcotic. That case was retired.

Parks has a current and valid real estate license in the state of Tennessee and works for EXP REALTY in Franklin. Parks is also a rapper who raps about women and addiction on his Soundcloud account.

Houston London Parks was booked into the Metro Nashville Jail on May 18th, charged with driving under the influence (DUI) and drug possession. A commissioner set his bond at $4,000, and the Davidson County Sheriff’s Office gave him pre-trial release from their facility.

Houston also has a Soundcloud account (https://soundcloud.com/houston-parks/tracks) where he posts his raps about his struggle with addiction.