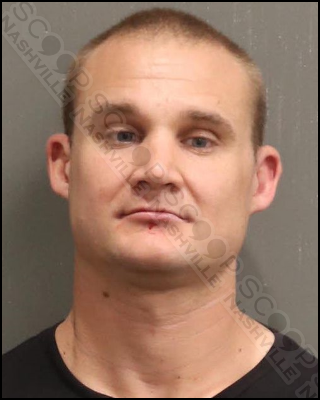 Officers working the EDI (Entertainment District Initiative) in downtown Nashville Friday observed 32-year-old Dustin Christopher Slade in a fight with another person at 5th & Broadway. While the other party didn’t wish to prosecute for the assault, officers determined Slade was too intoxicated to care for himself and attempted to place him into custody for public intoxication. Initially, Slade ran from the scene; however, officers were able to catch up with him a short distance away.

Dustin  Christopher Slade was booked into the Metro Nashville Jail on May 20th, and charged with public intoxication. A judicial commissioner set his bond at $500 before his case was dismissed after the eight-hour holding period.