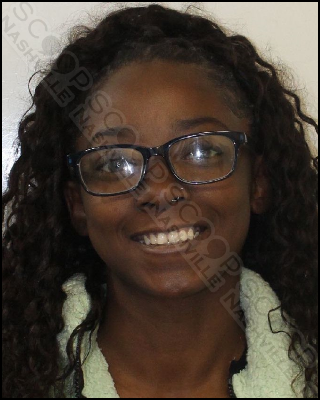 23-year-old Ariel Thomas was stopped for speeding and during the interaction with an officer, she admitted to “drinking a swig” from an open bottle of Paul Masson Whiskey, which she was carrying in a pouch on her shirt, and taking a Percocet. A second empty bottle of whiskey was also in the vehicle, along with other various open containers of alcohol. Also found in the vehicle was a small amount of marijuana and a loaded Taurus pistol. What wasn’t found was a valid license to drive, as she currently didn’t have one issued to her.

Ariel Andres Thomas was booked into the Metro Nashville Jail on May 26th, charged with driving under the influence (DUI), open container, drug possession, driving without a license, and possession of a weapon while under the influence. A commissioner set her bond at $4,000, and the Davidson County Sheriff’s Office gave her pre-trial release from their facility.