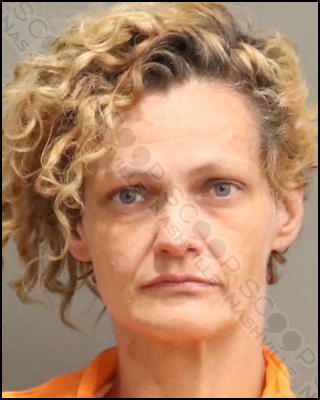 39-year-old Joan Lamb was booked into the Metro Nashville Jail late Friday night after she climbed to the top of a building that is closed to the public at 201 Broadway in downtown Nashville. Fire and police were dispatched to the scene after CMA Fest attendees noticed she had made her way onto the roof, onto which she threw a backpack after she used the fire escape ladder to make her way to the top of the building. MNPD’s Special Response Team was dispatched, and Nashville Fire eventually had to use a ladder truck in the middle of downtown to get the SRT officers onto the roof to take her into custody and recover the backpack, which was cleared.

Lamb was previously arrested on May 31st in Nashville, which appears to be her first interaction with the justice system locally after officers found her in a stranger’s vehicle at the loading dock area of the Birch building downtown, at which time officers noted she appeared to be high on narcotics and she confirmed she had used methamphetamine. That prior case was dismissed after the public intoxication hold expired and she was released from jail the same day she was booked.

Joan Lamb was booked into the Metro Nashville Jail on June 10th, charged with disorderly conduct and criminal trespass. A judicial commissioner set her bond at $2,000, on which she remained jailed at the time of publication.