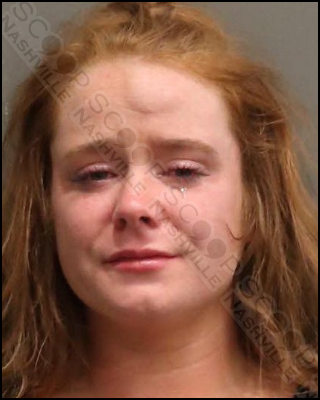 Metro Nashville Police officers working the Entertainment District Initiative in downtown Nashville for CMA Fest were flagged down by security outside of 429 Broadway, where they observed 27-year-old Christie Coulter, from Massachusetts, who was hitting and pushing people on her way out of the Mellow Mushroom. Sergeant Carlow Urrutia attempted to make contact and detain Coulter by grabbing her wrist, however, she became irate and resisted, causing him to take her to the ground. She was placed in a patrol car, despite attempts to pull away from officers, and then screamed and kicked the partition inside the cruiser. Once at booking, she continues screaming and causing a disturbance.

Christie Lee Coulter, of Canton Street in Randolph, MA, was booked into the Metro Nashville Jail on June 10th, charged with disorderly conduct and resisting arrest. She is free on a $1,500 cash bond.