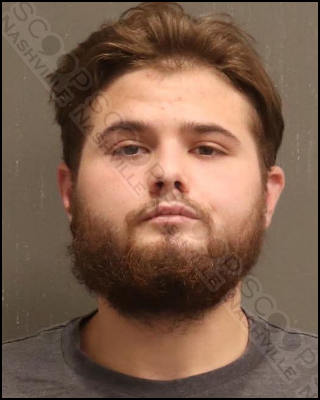 21-year-old Brian Marsh was booked into the Metro Nashville Jail Tuesday on an outstanding warrant charging him with the felony aggravated assault of his grandmother with a deadly weapon. The warrant states that two days after Christmas, Brian Marsh showed up at the home of his grandmother, Rebecca Marsh, while he was high on drugs and brandishing a pistol which he waved and pointed at her. She pushed the gun out of her way and told him to go on, at which time he grabbed her arms and said “I know you have money, you’re just not giving it to me”. The grandmother told detectives he was seeking money in order to pay for a criminal defense lawyer for an arrest in Rutherford County on drug and gun charges.

Brian Marsh, of Randall Lane in LaVergne, was booked into the Metro Nashville Jail on June 14th, charged with aggravated assault with a deadly weapon. He is free on a $10,000 bond.