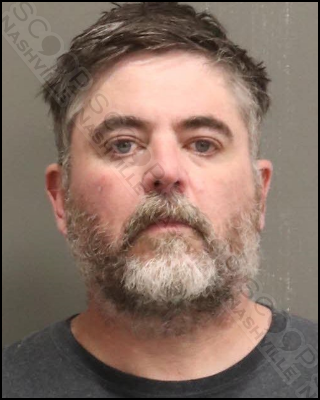 Police say 47-year-old Christopher Carothers was one block away from his home when he drove his white Lexus into the other lane of travel and collided with another vehicle, injuring two people. Officer founds Carothers sitting on a sidewalk, shaking with pinpoint pupils when they arrived. His sentences were incoherent and he continuously nodded off after admitting he had shot up with heroin shortly before the crash. Police located 30 Oxycodone pills and a dollar bill containing heroin inside the vehicle. After a warrant was granted for his blood, he was transported to Metro General before being booked into jail.

Christopher Carothers, of Bradford Avenue in Nashville, was booked into the Metro Nashville Jail on June 15th, charged with driving under the influence (DUI), unlawful possession of drug paraphernalia, and two counts of drug possession. A commissioner set his bond at $7,000, and the Davidson County Sheriff’s Department gave him pre-trial release from their facility.