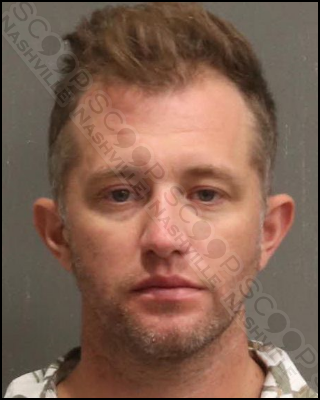 Metro Nashville Police received a call Saturday evening that two people riding on a red “moped” had fallen over due to drunkenness. As officers arrived at the intersection of N 14th St & Forrest Ave, 37-year-old Thomas Willey, in very slurred speech, identified himself as the driver of the motorized scooter. A witness says Willey attempted to flee before offices arrived, but was unable to successfully drive it away. Police note he was obviously intoxicated and admitted to drinking “2 margaritas” at a nearby bar earlier in the evening. He was transported to booking and charged with DUI.

Thomas Willey, of Sherwood Lane in Nashville, was booked into the Metro Nashville Jail on June 18th, charged with driving under the influence (DUI), and violation of the implied consent law. A commissioner set his bond at $2,500 and the Davidson County Sheriff’s Office gave him pre-trial release from their facility.