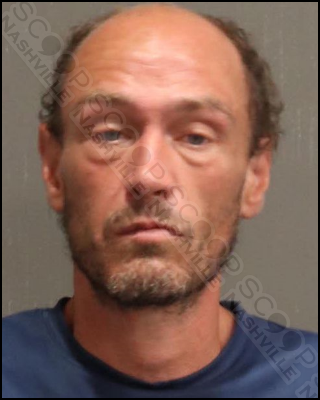 Metro Nashville Police responded to Rippy’s on Broadway in downtown Nashville on Saturday in response to 41-year-old Matthew Charboneau yelling and causing a scene with patrons on the sidewalk. Officer Kevin Clausius attempted to de-escalate the situation, however, Charboneau came at him aggressively and the two fought. Police say that during the fight, Charboneau broke the officer’s left ankle. Once he was cuffed, Charboneau then attempted to headbutt Officer Erickson. The officer was transported to Vanderbilt for his broken ankle.

Matthew Lynn Charboneau was booked into the Metro Nashville Jail on June 18th, charged with assault of an officer, public intoxication, resisting arrest, disorderly conduct, and aggravated assault on a first responder. A judicial commissioner set his bond at $12,350.