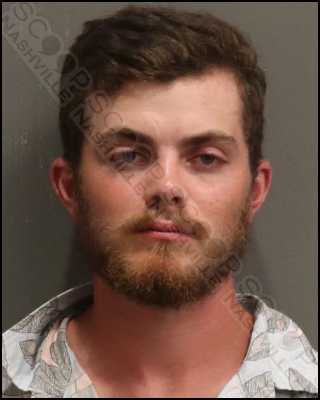 Metro Nashville Police Officer David Snowden says 25-year-old Riley Lee Roach refused to obey his “lawful orders” when he directed him to find his friend and get a ride home from downtown Nashville. Snowden claims that Roach was “causing trouble” with a food vendor so he demanded he leave the area. When the officer asked if he had too much to drink, Roach replied “not yet”. When Roach told Officer Snowden he wasn’t leaving or going anywhere, the bully MNPD officer told him he was placing him under arrest for public intoxication and disorderly conduct for “refusing to obey a lawful order” according to an arrest warrant.

Riley Lee Roach was booked into the Metro Nashville Jail on July 2nd, charged with public intoxication. A judicial commissioner set his bond at $500.