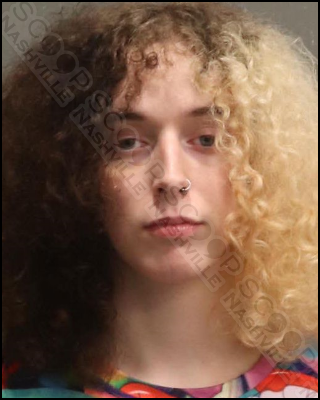 23-year-old Dakota Hobbs was booked earlier this month on a domestic assault charge against her lover, Gabriel Manning Welsh, and is now booked on a new vandalism charge from the same time period. After the assault of her (Hobbs was booked into male holding earlier this month, but is listed as a female on the most recent booking) lover, she was removed from the residence but did not have her phone as she was being kicked out. Her lover says she then walked around outside near his 2011 Jeep Cherokee and smashed out a rear brake light, destroyed a side mirror, ripped off the rear wiper, and damaged that motor. As the initial arrest focused on the domestic assault, the victim came to the Family Safety Center on July 7th to take out the additional warrant for the vandalism.

Dakota Kane Hobbs, of Greenbrier, TN, was booked into the Metro Nashville Jail on July 14th, charged with vandalism. They are free on a $1,500 bond.