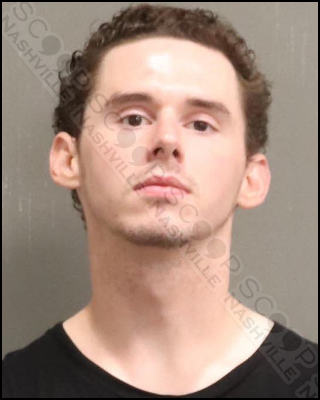 Metro Nashville Police responded to a call at the Lucky Bastard Saloon on Sunday about a man using cocaine in front of the bar. They arrived within moments to find 25-year-old Tristin Jackson, who fled inside when officers approached him and made contact. After a chase and struggle inside the venue, officers placed him into custody and seized a dollar bill with a small amount of what appeared to be cocaine remaining inside. He was charged with drug possession, resisting arrest, and evading arrest. The response time for this personal drug use call was near immediate. Jackson is a resident of Franklin.

Tristin Jackson, of Broyles Lane in Franklin, TN, was booked into the Metro Nashville Jail on July 17th, charged with drug possession, evading arrest, and resisting arrest. A judicial commissioner set his bond at $1,500, and the Davidson County Sheriff’s Office gave him pretrial release from their facility.