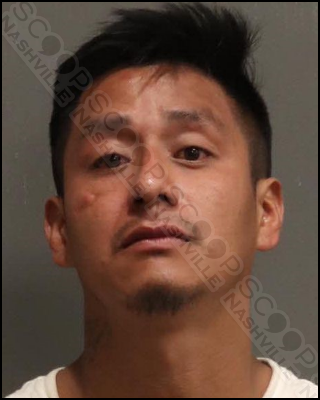 Metro Nashville Police responded to Rippy’s Honky Tonk on Broadway in downtown Nashville Friday night in response to 30-year-old Cruz Crisantos Cortez, who was kicked out of the bar due to being disorderly. As officers arrived, he attempted to re-enter the bar, being belligerent and causing a scene on the sidewalk. He was taken into custody and charged with public intoxication and disorderly conduct when he refused to cooperate with officers.

Cruz Crisantos Cortez was booked into the Metro Nashville Jail on July 22nd, charged with public intoxication and disorderly conduct. A judicial commissioner set his bond at $1000, and the Davidson County Sheriff’s Department gave him pre-trial release from their facility.