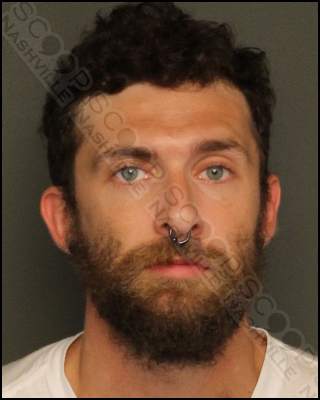 Matthew Stephens says one of his roommates, 32-year-old Elijah Leavens, came “storming out of his room in a fit of rage” on June 20th as Matthew was confronting another roommate about finding moldy food in the kitchen as he returned from an out-of-town trip. Elijah was reportedly not involved in the conversation yet began an argument. He then punched a hole in the shared bathroom door. A warrant for vandalism was issued for his arrest, which he was booked on this week.

Elijah David Leavens was booked on the summons charging him with vandalism on August 5th. His court date is set for later this month. At the time of this booking, Leavins was out on bond for a domestic assault case in which he was charged with biting his ex-girlfriend: