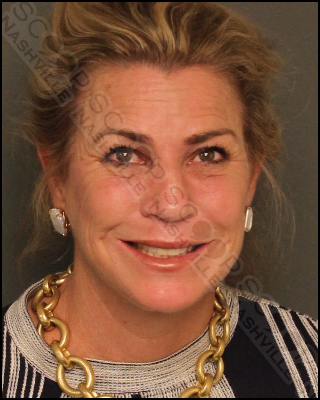 57-year-old Josephine ‘Jodie’ Barringer was booked this week on an outstanding citation from May charging her with DUI. Nashville Fire says they were the first to arrive at the scene on May 4th to find Barringer unconscious in the driver’s seat of her Volvo XC60, which had crashed on Woodmont Blvd, striking a fire hydrant and a utility pole. First responders administered 4mg of NARCAN, and she regained consciousness while being loaded into the ambulance. She admitted to taking a pill that a friend gave her prior to driving but denied knowing what it was. Officers say she was sweating profusely and was very disheveled in her appearance. She was transported to the hospital and given a state citation in lieu of arrest.

Josephine ‘Jodie’ Davenport Barringer was booked on her outstanding citation for driving under the influence (DUI) on August 3rd and given a new court date in September.