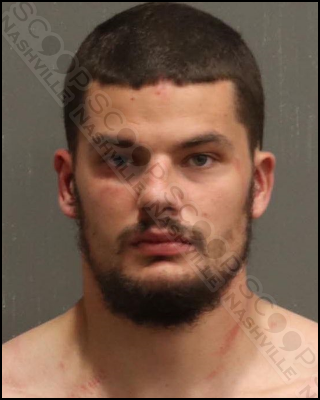 Metro Nashville Police responded to a report of a fight at Twin Kegs II near downtown Nashville and found 26-year-old Milos Petkovic across the street shirtless and with scrapes and cuts on his body. He reeked of alcohol and was slurring his speech. He stated he consumed two shots of Maker’s Mark and a Guinness beer at the bar. No one wanted to press assault charges, so officers offered to help him find a ride home due to his level of intoxication; however, Petkovic insisted he was not drunk and accused officers of having no dignity, no respect, and of insulting his family’s honor. He refused all offers of assistance to avoid jail and was eventually transported to booking.

Milos Petkovic was booked into the Metro Nashville Jail on August 14th, charged with public intoxication. A judicial commissioner set his bond at $100.