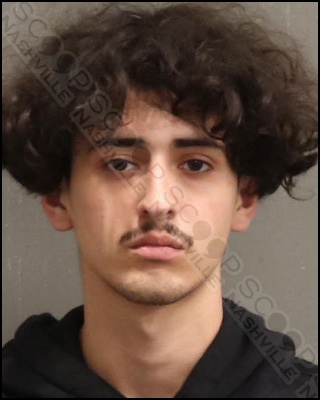 Police conducted a traffic stop on 18-year-old Elder Eli Milla-Rodriguez just after noon on Monday when he failed to stop fully at an Antioch stop sign. More interestingly to the officer watching was that he stopped at a driveway just before the stop sign, where a female was standing at the end of the driveway, to whom he sold marijuana through the passenger side window. As the traffic stop was conducted, the officer reportedly smelled marijuana, and Elder advised he had a firearm in the vehicle when told a search would be conducted. Officers found 30.4 grams of marijuana, a Glock 22 with a drum-style magazine. Elder told police he routinely buys marijuana and edibles by the ounce and resells them, and carries the firearm for protection.

Elder Eli Milla-Rodriguez was booked into the Metro Nashville Jail on October 10th, charged with possession of marijuana with intent to sell, possession of a weapon during a dangerous felony, and no driver’s license. A judicial commissioner set his bond at $20,500.