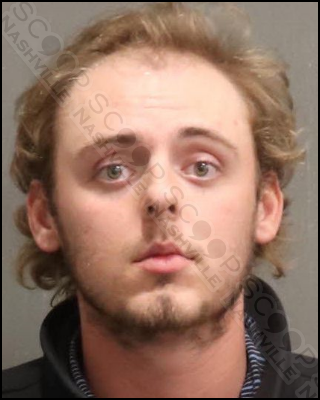 23-year-old Bryant Reynolds wrecked his gray Nissan Altima into a large ditch Monday evening in Madison, and officers responded to the scene after a passerby called in the accident. As they approached, Reynolds exited his vehicle and stated he needed a tow truck, as he was driving and he just “ended up there,” but he wasn’t sure how it happened. Offices report Reynolds was obviously intoxicated and observed an open container of a Crown Royal mixed drink, along with additional cans in the vehicle. He admitted to having “several mixed drinks and two shots of Crown Royal” a few hours before driving. He was transported to booking and charged with DUI. He blew a 0.122% BAC on a breathalyzer.

Bryant Reynolds of Fischer Dr in White House, TN, was booked into the Metro Nashville Jail on November 14th, charged with driving under the influence. A judicial commissioner set his bond at $3,000.