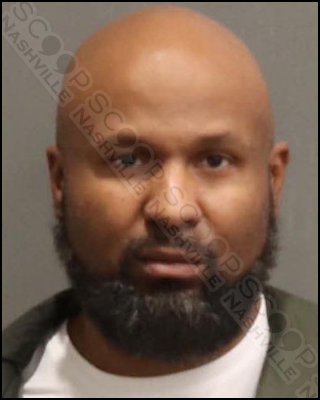 Metro Nashville Police say 43-year-old Darrow Fowler was acting as a pimp for a woman being trafficked in Nashville. Detectives received reports about the trafficked woman and were able to locate her advertisements on an adult escort website. Officers made contact and agreed to meet at the Comfort Inn Downtown Nashville-Vanderbilt. Officers surveilled the hotel prior to the meeting time and observed Fowler exit the room just before the agreed-upon time to meet. He got into a white SUV that belonged to the victim.

As a detective entered the room, posing as a ‘John’, the woman’s phone rang with the contact name of “Best Friend,” and it was Fowler – police say this is a common tactic for pimps, or ‘promoters’ as they’re now being called. As Fowler attempted to drive away, nearby officers conducted a traffic stop, and he was taken into custody. He had all of her banking cards in his possession.

Darrow Fowler of Lynn St in Lincolnwood, NE, was booked into the Metro Nashville Jail on December 7th, charged with promoting prostitution. A judicial commissioner set his bond at $2,500.