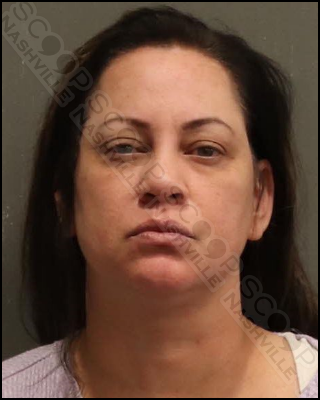 Police say 48-year-old Tiffany Russ was drinking when she received a message from an ex-boyfriend who was in jail in Memphis, and her current boyfriend told her he was unable to protect her from the ex-boyfriend who was in jail. Witnesses say she became increasingly angry and began to use a knife to cut up furniture around the home, also breaking a window and a vase. When the current boyfriend, Ronald DeVaughn, tried to “calm her down” she slashed at him with the knife causing him to be in fear she was going to attack him.

Tiffany C. Russ was booked into the Metro Nashville Jail on February 16th, charged with aggravated assault with a deadly weapon. She posted a $10,000 bond and was released to her 400 Adamwood Drive address in Nashville, TN.