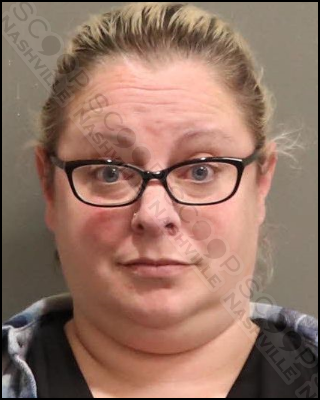 Nashville Police say 43-year-old Jamie Westerhoff drove her car into a tree next to oncoming traffic early Wednesday. She was sitting in the driver’s seat with the vehicle still in drive when officers arrived. She was unable to provide police with words in any order that made much sense, but she did blow a 0.247% BAC on the breathalyzer — over three times the legal limit in Tennessee. She was too intoxicated to perform field sobriety tests at the scene without being a danger to herself.

Jamie Adams-Westerhoff was booked into the Metro Nashville Jail on February 23th, charged with driving under the influence (DUI). She is free on pre-trial release to her 2118 Fairfax Ave. address in Nashville.