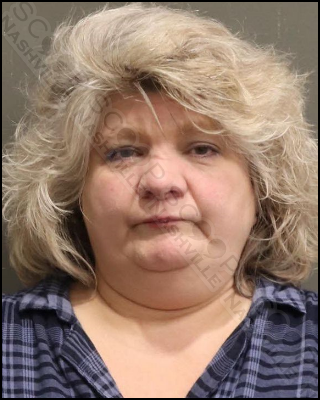 61-year-old Cathy Turner is free on a $5,000 bond after confessing to walking out of the Walmart cash room, where she worked, with $30,860.00 according to police. Walmart management discovered a $13,700 deposit shortage on March 7th, and after reviewing security footage it was discovered that employee Cathy Turner was taking cash from the cash room and taking those bags to the restrooms in the rear of the store, where she then would leave the store with it. Additional research discovered her taking $7,600 on February 6th, and another $9,500 on February 19th. She provided a written statement to Walmart Loss Prevention during an interview. When she spoke with police, she stated “I know this was wrong, I’ve never done anything like this before”, then requested to withdraw the written statement she had provided.

Cathy Turner was booked into the Metro Nashville Jail on March 9th, charged with 3 counts of felony theft. She is free on a $5,000 bond to her 3835 Dewain Drive address in Nashville.