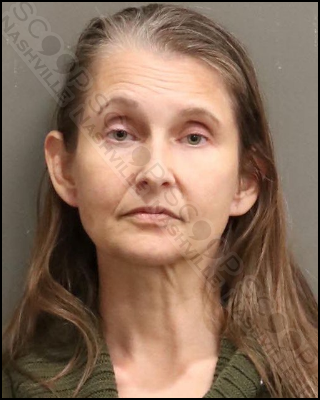 Airport police took 50-year-old Lori Rogalski into custody outside of the “minute suite” she had rented near Gate 3 inside the Nashville International Airport last week. Staff initially notified officers after she stole another guest’s open alcoholic beverage, drank it, and then bought four more for herself. She was offering her mango ginger edibles to people who were walking by and yelling “It’s my birthday!” — which it was. She was transported to booking and charged with public intoxication and drug possession. Once she arrived downtown, she exclaimed “I am drunk!” while walking into booking.

Lori Rogalski was booked into the Metro Nashville Jail, and charged with simple drug possession and public intoxication. The district attorney’s office declined to continue prosecution on either charge the following day.