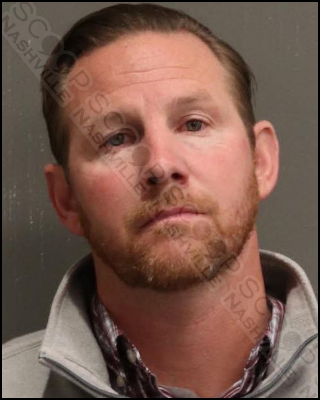 While in town from California, Jennifer Hawkins called police to report that while she and her husband, 40-year-old William Hawkins, were out at a bar on Broadway she took a photo of a person with her iPhone, resulting in him grabbing her phone and smashing it on the ground, destroying it. She says she was taking a photo of her husband, however, he believes she was taking a photo of another man. Officer Gault transported the wife to a nearby Apple store so she could purchase a new phone, and Officer Hill took Hawkins into custody, charging him with felony vandalism with a domestic violence rider, invoking the state-manded 12-hour hold before his release.

William Hawkins was booked into the Metro Nashville Jail on April 8th, charged with domestic violence-related vandalism. After the state-mandated 12-hour hold for domestic violence cases, he was freed on a $1,500 bond to his 464 Old Auburn Road address in Citrus Heights, CA.