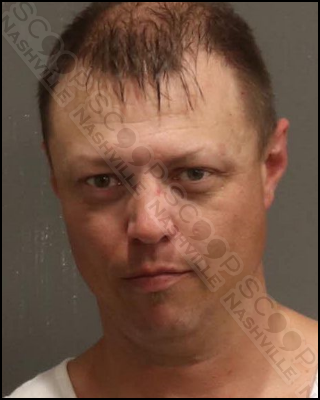 Metro Nashville Police received a call on Thursday mid-day, reporting that staff of Luke Bryan’s Bar on Broadway in downtown Nashville had a man pinned to the ground and needed assistance. Officers arrived to find 40-year-old Shane Anthony Peters still being held to the ground. Security staff stated he was being unruly and was asked to leave but refused to do so. When he became combative, he was taken to the ground to await the arrival of the police. Peters told police he had been drinking during the day and didn’t like how staff approached him. He was taken into custody and charged with public intoxication.

Shane Anthony Peters, of Franklin, was booked into the Metro Nashville Jail on May 5th, charged with public intoxication. A commissioner set his bond at $50.