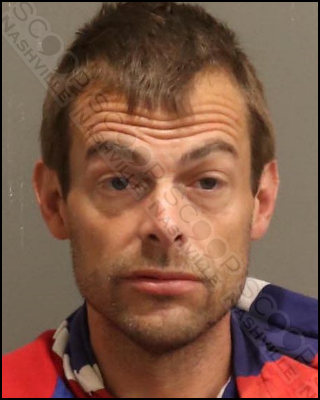 42-year-old John Paul Jones remains jailed in lieu of a $10,100 bond after police say he showed up outside the East Nashville home of Elmer Boykin, Jr., and stripped off his clothes until only a shirt remained on his body. He then came to the front door with rocks in his hand and demanded Boykin open the door. When Boykin refused, Jones smashed the glass door with a rock and told him, “I have 3 more rocks, and the next one is coming through the main glass.” He reached into the broken window pane and attempted to unlock the inner door. Boykin and Jones have a history, and police say Boykin has been the victim of several “domestic-related” calls with Jones in the past. Officer Kinsey arrived and de-escalated the situation before it could progress further, and took Jones into custody. A report from that evening notes the officer believed Jones to be under the influence of a controlled substance.

John Paul Jones was booked into the Metro Nashville Jail on May 14th, charged with public intoxication and felony aggravated burglary. A judicial commissioner set his bond at $10,100.