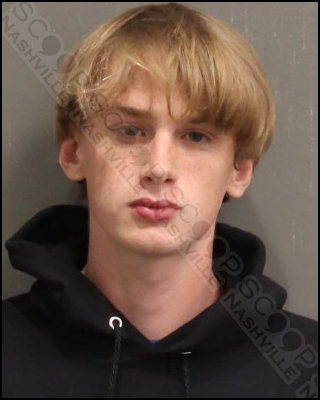 A roommate rumble left ‘Dakota’ Caleb Hooks-Johnson bloody and with welts, and 20-year-old Anthony Barnes in jail, charged with domestic assault. On May 16th, the duo had an argument about paperwork required by the leasing office of their apartment complex, and at some point, Barnes believed that Hooks-Johnson disrespected his girlfriend. The two went outside, separated, and attempted to discuss the matter in an adult matter, however, Barnes was not being reasonable. Barnes eventually followed his roommate back up the steps to the landing where they tussled, and Barns struck him with his fists until Caleb-Hooks picked him up around the waist. During the eventual brawl, a neighbor’s window was broken out, and Hooks-Johnson ended up with welts and redness on his back and cuts from the broken glass.

Anthony J Barnes was booked into the Metro Nashville Jail the following day, on May 17th, and charged with domestic assault with bodily injury. He is free on a $1,000 bond.