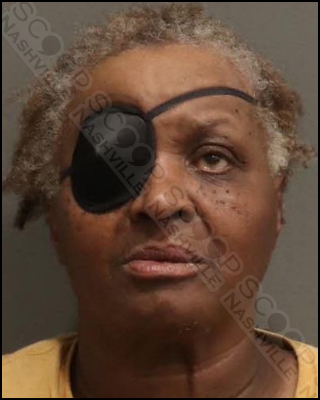 Metro Nashville Police responded to Claiborne Street Thursday, where Eugene McClain advised he was sleeping on the living room couch around 3:30 a.m. when his girlfriend, 66-year-old Marie Cunningham, attempted to wake him up by striking him twice in the arm with a metal walking cane while saying, “You ain’t sleep!” Officers documented bruising on his arm, consistent with being assaulted with a cane. Ms. Cunningham denies that any assault took place. A can was located inside the home and seized as evidence. It is unknown if they patched up their relationship since she bonded out.

Marie Cunningham was booked into the Metro Nashville Jail on May 19th, charged with felony aggravated assault with a deadly weapon. She is free on a $2,000 bond.