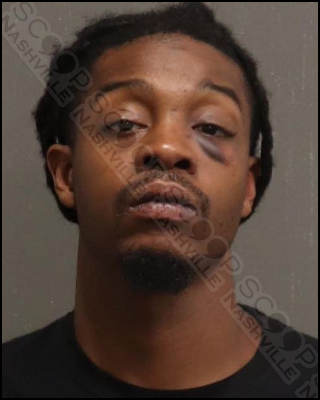 33-year-old Michael Batchelor is jailed on domestic assault and harassment charges after showing up at the home of his child’s mother Wednesday and threatening her life and to shoot up her apartment. The harassment started that same morning when he advised he was coming to see his child, and Jakytra Johnson told him he wasn’t currently welcome there and he needed to make better arrangements with more advanced planning as he had recently made threats to her.

He showed up later that afternoon after multiple calls and threats to end her life. Multiple witnesses at the residence were able to take video and corroborate the events to the police. One of the videos shows Batchelor making threats on Johnson’s life and attempting to assault her daughter’s boyfriend, Chris Jones.

Michael Batchelor was booked into the Metro Nashville Jail on May 19th, charged with domestic assault/fear of bodily injury, and harassment/repetitive calls. A commissioner set his bond at $20,000. He remained jailed at the time of publication.