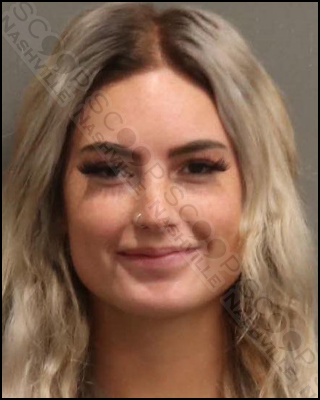 Metro Police were dispatched to Victory Ave on May 13th on a disorderly person call. They met with Tymber Fullard, who explained she and friends were visiting Nashville from Georgia to attend a concert. She says her former roommate, 21-year-old Abigail Haley Millsap, followed her from Georgia all the way to Nashville with the intent to harass the group of friends. Millsap reportedly threw a bottle of liquid onto Fullard, causing a “slimy orange-colored liquid” to spill onto her legs, boots, and hands, as the bottle shattered. Millsap fled the scene before police arrived, and a warrant was issued for her arrest.

Millsap, who goes by “Abigail Haley” online, has just under 30,000 followers on her private Instagram account, @abigailhaleym, which also links to her OnlyFans account, @littlered_, which boasts 12,000 followers and has over 88,000 likes to her 250+ photos and 70+ videos.

Abigail Haley Millsap, of Old Rome Road in Kingston Springs, Georgia, was booked into the Metro Nashville Jail several days later, on May 17th, and charged with domestic assault. She is free on a $1,500 bond.