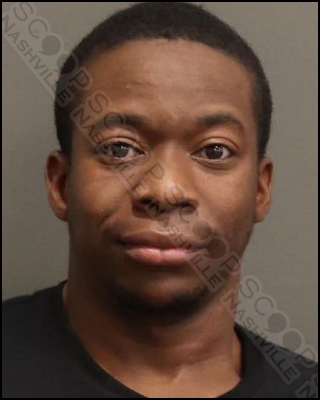 30-year-old ‘Son of the South’ Joshua Carney, a paraplegic man turned motivational speaker who appeared on shows such as Swamp People & Southern Boyz, was arrested in Nashville over the weekend after admittedly drinking and using marijuana prior to driving and getting into an accident while attempting to park between a tour bus and a dumpster in downtown Nashville.

Metro Nashville Police say Carney was involved in a crash in the parking lot of 1907 Division Street in the early morning hours of May 21st after he says security personnel told him his truck would fit between the tour bus and the dumpster, but that turned out to be bad advice. A Jeep parked near the dumpster sustained minor damage from the impact. Officers say Carney’s speech was slurred, his eyes watery, and he admitted to consuming “two beers” and using marijuana earlier in the night. After being transported to Metro General for a blood draw, Carney was booked into custody for the DUI and driving on a revoked license, out of the state of Louisianna.

Josh Carney, of Nashville, was 13 years old and on his first-ever turkey hunt when his father accidentally shot him. Carney said they didn’t know the regulations regarding turkey hunting, and that his father was using 00 (double-ought) buckshot for the spring hunt. He nearly killed his son when he shot at a turkey that had slipped between him and Josh as they sat 30 yards from each other. He has since made a career in the outdoors/hunting industry, working as a motivational speaker and appearing on hundreds of podcasts and television shows, including the outdoor show he calls “Son of the South,” and has thousands of followers on social media platforms. In addition to hammering on the importance of hunting safety, he also demonstrates an uncanny ability to make turkey calls and other animal sounds using only his mouth. “I’ve done maybe 500 podcasts in the last few years,” Carney often says during interviews.

Joshua Jerome Carney was booked into the Metro Nashville Jail on May 21st, charged with driving under the influence (DUI) and driving on a suspended license. A judicial commissioner set his bond at $3,500, and the Davidson County Sheriff’s Office gave him pre-trial release from their facility.