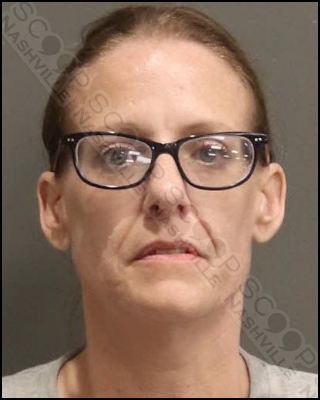 45-year-old Krista Welsh locked herself into the bathroom at Night Court in downtown Nashville Sunday afternoon and refused to come out or open the door despite repeated requests by security and police. Eventually, Nashville Fire used a screwdriver to defeat the locked door and MNPD placed her into custody for disorderly conduct. During a search of her purse, officers found four pill bottles bearing the name of ‘Louis Fendley”, who she says is an “old friend” that left them in her purse. According to multiple social media accounts, the two are in a romantic relationship. The pills in the bottlers were Baclofen (a muscle relaxer), Bupropion, Clonidine, and Lisinopril. She was additionally charged with drug possession without a prescription.

Krista L Welsh was booked into the Metro Nashville Jail on May 22nd, charged with disorderly conduct and legend drug possession without a prescription.