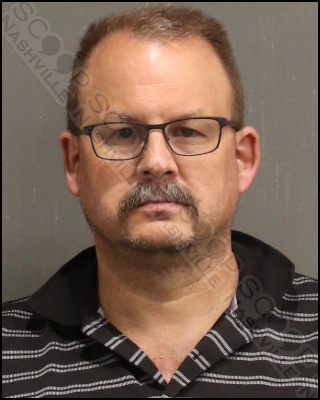 50-year-old Benjamin Hardin, a Metro Nashville employee, is charged with the domestic assault of his stepdaughter. The victim says she was in an argument with her mother, Sonya, when Ben intervened by grabbing her by the neck, squeezing her, and forcing her to the ground. On the way to the ground, her head hit a table, and he reportedly then pinned her to the ground while shouting at her. Ben claims he only stepped in when Sonya looked at him during the altercation and stated, “You need to mediate this!” Ben reportedly told the victim, “This is my house!” while standing nose-to-nose with her, and shortly before taking her to the ground, she responded, “What are you going to do about it?” He claims he proactively took her to the ground to prevent her from assaulting him. Sonya told police the physical force Ben used was “unnecessary,” and she had to pull him off the victim to prevent the situation from escalating further.

Benjamin R. Hardin, of Richmar Drive in Nashville, was booked into the Metro Nashville Jail on May 23rd, charged with domestic assault/offensive or provocative conduct. He is free on a $1,000 cash bond.