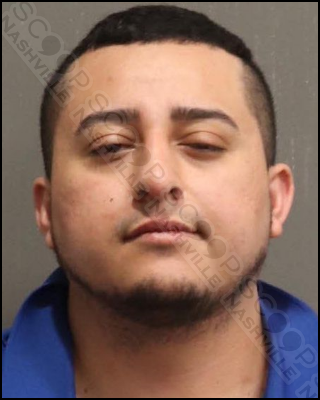 Metro Nashville Police say 30-year-old Jonathan Cordon, of La Vergne, was unable to pay his $508.53 bar tab at Kid Rock’s Bar on Broadway in downtown Nashville Thursday morning. Police initially responded to the venue after Cordon continued to re-enter the bar after being removed by security staff for fighting other patrons. He kept sneaking in through a window and was removed twice already when police came to assist. They observed him being belligerent and extremely intoxicated. As they placed him in the patrol car to be transported to booking, bar staff alerted officers the credit card was declined. Cordon said he had no other way to pay the bill, and Kid Rock’s bar wished to prosecute for the unpaid tab.

Jonathan Josue Cordon was booked into the Metro Nashville Jail on May 26th, and charged with theft of services and public intoxication. He is free on a $1,100 cash bond.