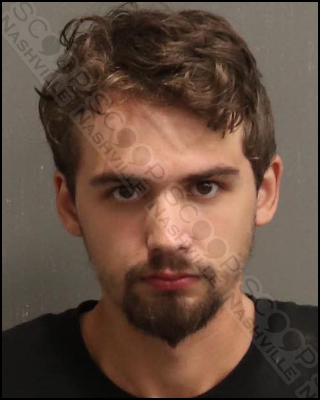 Metro Nashville Police say 21-year-old William Pearce was so drunk they had to stop field sobriety tests for fear he would fall over and injure himself in the parking lot of the AT&T building in downtown Nashville where they encountered him. Security contacted police after hearing a crash and observing Pearce backing up from a vehicle he had struck in the garage. A police report details Pearce was sweating profusely with slurred speech and other signs of intoxication. He was taken into custody and charged with DUI, driving without a license, and violation of the implied consent law.

William Pearce was booked into the Metro Nashville Jail on May 24th, charged with driving under the influence (DUI), violation of the implied consent law, and driving without a license. A commissioner set his bond at $3,000 and the Davidson County Sheriff’s Office gave him pre-trial release from their facility.