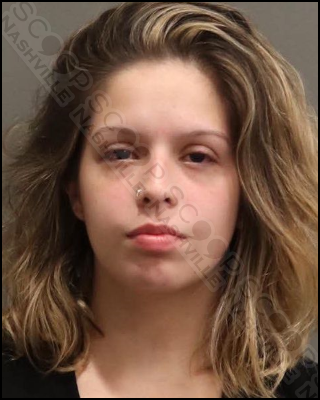 Nashville Fire Department medics had to force entry into the vehicle of 23-year-old Gabriela Valencia after she drove off the road and was found passed out behind the wheel of her vehicle near the Hardee’s on Nolensville Road. Police arrived soon after she had become responsive and observed her to be heavily intoxicated. Valencia stated she was coming from El Monte’s where she had been drinking and admitted that she knew she had too much to drink prior to driving. She performed poorly on field sobriety tests and was transported to booking.

Gabriela Valencia, of Westminister Drive in Franklin, was booked into the Metro Nashville Jail on May 22nd, charged with driving under the influence (DUI) and violation of the implied consent law. A commissioner set her bond at $2,500, and the Davidson County Sheriff’s Department gave her pre-trial release from their facility.