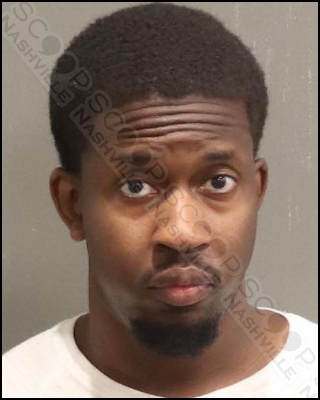 Metro Nashville Police say 29-year-old Tumani Sissoko left the Lavo Lounge just before 3 a.m. Saturday, drove his vehicle off the side of I-24 less than a mile away, and crashed in the area behind Metroplex Drive — where he lay injured until 7:40 a.m. when first responders were alerted to the overnight accident. Police say in those hours after the crash he climbed into the passenger seat, due to the driver’s area being so badly damaged. He stated he wasn’t driving, but the injuries matched the driver’s seat, and that’s where his blood was located. He was charged with DUI.

Tumani Sissoko was booked into the Metro Nashville Jail on June 4th, charged with driving under the influence (DUI). A commissioner set his bond at $1,500 and the Davidson County Sheriff’s Office gave him pre-trial release from their facility.