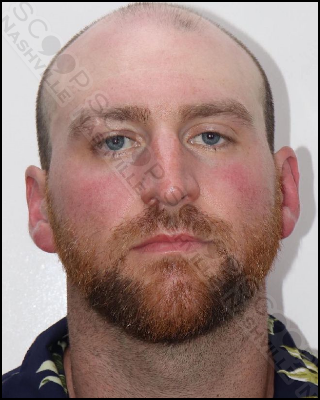 TWRA Agent Joshua Landrum observed 34-year-old Benjamin Allen Bearden attempting to navigate his pontoon-style vessel to the fuel dock at the Elm Hill Marina on the 4th of July, and notes Bearden was having “extreme difficulty” maneuvering the boar and nearly hit both the dock and another boat before he was stopped. Bearden reportedly appeared extremely intoxicated and stated he drank “a couple of margaritas.” After performing poorly on field sobriety tests he was transported to booking and charged with BUI and reckless/negligent operation of a boat.

Benjamin Allen Bearden, of Forrest Green Drive in Nashville, was booked into the Metro Nashville Jail on July 4th, charged with boating under the influence (BUI), and negligent operation of a boat. A Judicial commissioner set his bond at $5,500 and the Davidson County Sheriff’s Office gave him pre-trial release from their facility.