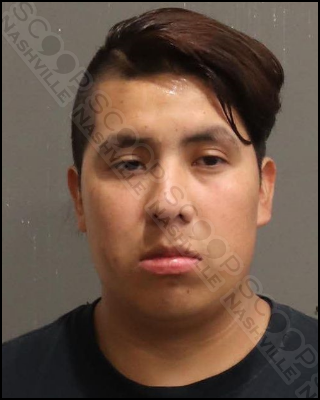 22-year-old Henry Juarez-Perez is now jailed on a $10,000 bond, charged with statutory rape after Metro Nashville Police discovered his prior relationship with a 16-year-old girl and sex that occurred over a year ago. Officers initially responded to a domestic disturbance call on July 3rd, when his ex-girlfriend and mother of this child called 911 to report that he was drunk and came to her apartment accusing her of “finding someone new” and hitting her multiple times. She locked herself in the bathroom, along with their one-year-old son, until officers arrived. While they did not find any marks or injuries from an assault, some quick math with everyone’s age and dates of birth resulted in a felony statutory rape charge for Perez, who is six years older than Maria, the mother of his child.

Henry Juarez-Perez was booked into the Metro Nashville Jail on July 3rd, charged with felony facilitation of statutory rape. A judicial commissioner set his bond at $10,000.