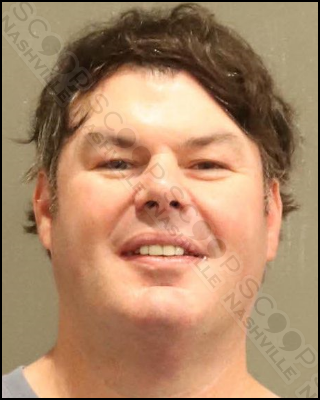 47-year-old Dean White told off Metro Nashville Police he drank “two bottles of Pinot Grigio” in the early morning hours prior to crashing his car into another vehicle at 11:17 a.m. Saturday. The accident occurred near the Church Street exit of I-40, just blocks from his residence in the 1800 block of Church Street. He further disclosed he had not consumed any food since 7 p.m. Friday. He reportedly reeked of alcohol and had inconsistencies about where he was coming from and what occurred. White refused field sobriety testing, but was transported to Metro General for a blood draw as the other party sustained injuries from the accident.

Dean Smith White of 1818 Church Street in Nashville, TN, was booked into the Metro Nashville Jail on July 30, charged with driving under the influence (DUI). A judicial commissioner set his bond at $1,500, and the Davidson County Sheriff’s Office gave him pre-trial release from their facility.