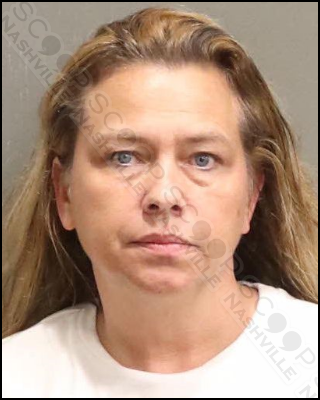 Police conducted a welfare check on a woman who appeared to be unconscious inside a parked, but running, vehicle at a Conference Drive hotel early Monday morning. Inside was 43-year-old Charlotte Ann Frierson with a silver canister between her legs with obvious drugs and paraphernalia within view. As one officer pushed the front of the car to rock it, another knocked on her window, eventually waking her up. A loaded .38 revolver, which was stolen, fell from her pocket as she exited the vehicle, and officers conducted a search. Inside the vehicle, they located a good scale with white residue, five baggies of crack cocaine (82g), 2 baggies of meth (12g), marijuana (12g), Fentanyl (31g), 21 Oxycodone pills, 100 plastic baggies, three crack pipes, a baby bottle converted to a bong, baking soda packaged as a drug (18g), and $885 in cash. Though mostly erased from current versions of its website, a Tennessean article archives that Charlotte ‘Char’ Grant Frierson was a co-founder of the Mending Hearts recovery program in Nashville, with her partner Trina Frierson.