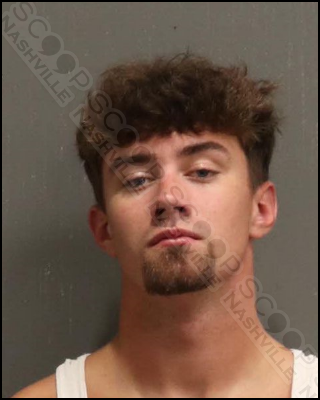 Metro Nashville Police Officers working the Entertainment District Initiative in downtown Nashville Saturday responded to 6th & Broadway, where they observed 20-year-old Hunter Bilyeu yelling and fighting another individual. Officers separated the parties, and the victim did not want to press assault charges. Officers told Bilyeu to go on about his night and leave the area, but he refused and continued to be aggressive and once again started to fight the other individual in front of police. He was taken into custody and charged with disorderly conduct.

Hunter A. Bilyeu, of Woodard Road in Springfield, TN, was booked into the Metro Nashville Jail on August 6th, charged with disorderly conduct. A judicial commissioner set his bond at $1,000, and the Davidson County Sheriff’s Office gave him pre-trial release from their facility.